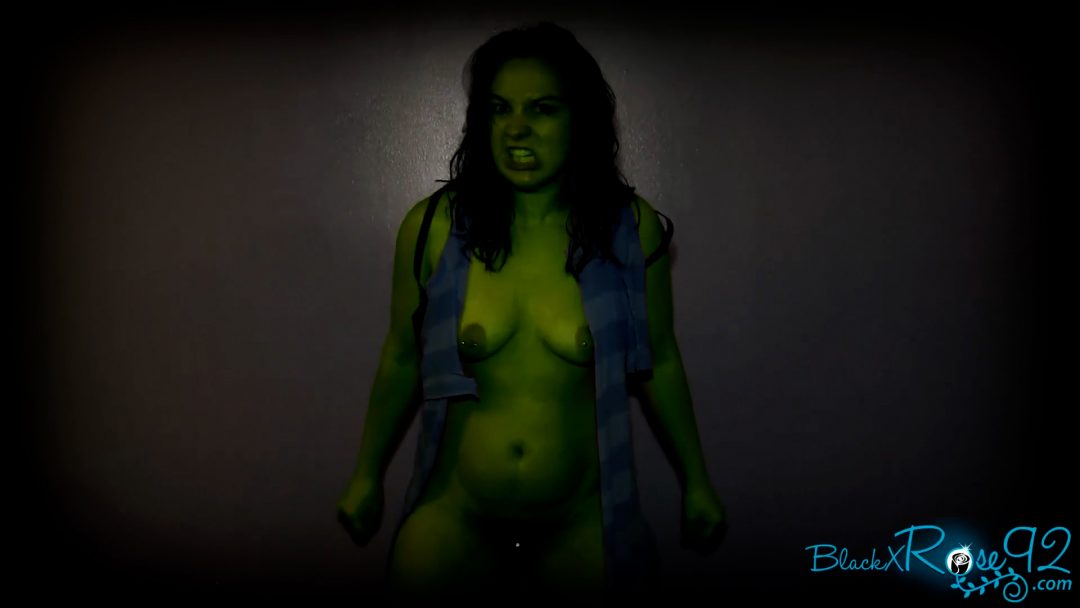 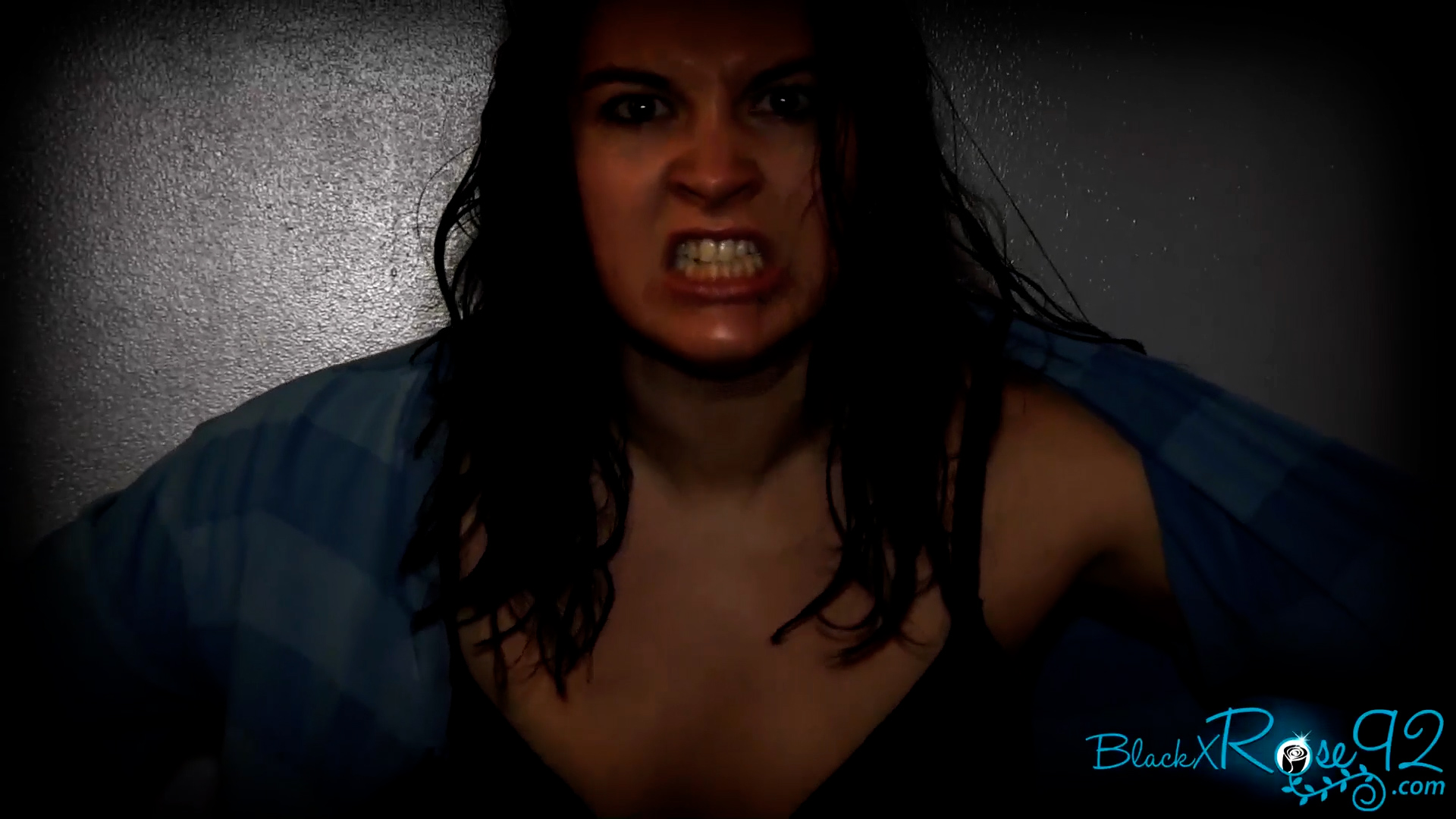 Custom request: “Location: You can just film the bulk of the clip in the same spot as your other hulk clip (the blue wall), I think the way it was set up in that was perfect. The beginning of the clip can take place in any other area you can film in.
Wardrobe: Rose is wearing her glasses, has her hair tied up, and is wearing a long sleeve shirt (will be ripped) and sweatpants with a bra and panties underneath. She is barefoot as well.

Pre-story to the clip is that Rose and her boyfriend were in the woods, and some mysterious monster came and tried to attack them. They found a house (where the clip takes place) that they are held up in, and can’t go outside for the night. The problem is that Rose doesn’t like full moons, and this night happens to be one… Clip: The beginning is POV and starts out as this:
Rose walks into the room, with you (the camera/her boyfriend) looking at her. She is visibly panicked by their escape in the woods. She says that the house you and her are in should be pretty safe for now, so hopefully after the night passes, you and her can leave to find help. Both of your cell phones are and nobody knows you were in the woods. Rose, realizing that some nights aren’t very good for her, asks if you can remember what the moon was like when they were outside. It was still sunset but you could see it. You (without actually speaking or being seen, Rose is just acting as if you are saying all of this) say it was a full moon, and Rose’s eyes go wide open. She is freaked out but tries to hide it. Rose then says that she thinks everything will be fine for you and her, but her visual expressions don’t really show that. She then says that she’ll go check another room to see the rest of this place, and asks you not to follow her. She leaves.

Rose walks into the the blue walled room, alone (it’s no longer POV, just focusing on Rose now). She can be heard cursing and panicking over the full moon being out tonight (etc “, ! I can’t afford to have a full moon tonight, I’m trapped with him and I might him!”). Rose considers just leaving without him, but realizes that the monster might still be hanging around outside. Rose tries to think of something else she can do, but suddenly and overwhelming pain hits her. She curses again, saying that it’s happening, and she can’t hold it back anymore.
(In between that and what happens next, I will insert a shot of the full moon outside, glowing brightly) There is a close-up of Rose’s face, and her eyes can be seen glowing a green color briefly. It has begun. There is a close-up of Rose’s sleeves, as they roll up her arm and tighten (the video below will explain this). There is a close-up of Rose’s chest, and her breasts can be seen growing underneath her shirt (this is my effect, just puff out your chest a bit and I will digitally make them grow!) Back to the normal shot, Rose freaks out, looking at her arms and realizes that she can’t stop it. She’s going to keep growing and she will transform. Her glasses fall off, and she rips out her hair tie, letting her hair flow down.
There is a close-up of Rose’s stomach, as her shirt rises up and tightens, exposing her stomach (video will explain this as well).
There is a close-up of Rose’s pant legs, as they rise up her leg and tighten (refer to video). Rose examines her body and continues to gasp, this time saying that she might wind up him (her boyfriend) uncontrollably. She realizes this and starts repeating to herself that she’s gotta stay in control, can’t get angry…

There is a close-up of Rose’s shirt, this time with it ripping in half (video explains this). Another close-up, this time of her back, is shown, and the clothing rips on her back as well.
Rose, now standing there in her ripped shirt and tight pants (which in between the close-up and this shot is pulled down slightly to show her panties), throws off her ruined shirt and takes off her pants. She flexes in horror, realizing that her muscles have gotten huge. She looks at her legs in horror as well, saying they are so rock hard they could pop a man’s head open in one press. Rose then feels a massive spike of pain in her head, and recoils from it. She can’t control her urge anymore to destroy… she starts grunting in pain, saying that she can’t give in. Rose then yells out to her boyfriend in the other room, telling him to lock the door and stay in there, before it’s too late. She then yells, and her personality has been corrupted with rage. Rose starts making a She-Hulk pose (similar to your other She-Hulk clip, hunched over a little and fists clenched), and says that she’s going to smash this monster outside. She slowly loses her ability to speak from the transformation, instead grunting and yelling with rage.

There is a close-up of Rose’s chest, and her bra falls out (refer to video), rendering her topless. Rose’s skin starts turning an emerald green color as she flexes, turning her into the She-Hulk! She angrily starts shaking, and then she yells out: “She-Hulk will…. She-Hulk will SMASH puny man AND monster!”. She stomps out of the room, ending the clip.

← She Hulking Out She Hulk’s Transformation Struggle →